We can’t emphasize enough the role that our better understanding the overall needs of our companion animals to help them live better plays today. Advances in veterinary care, better education with pet owners in understanding what makes for a healthy pet and even strides in understanding animal behavior have had a hand in that.

But what it really comes down to, according to a recent study, is the human factor.

The State of Pet Health 2013 Report fleshed out some interesting findings, including how far both dogs and cats have come in recent years in terms if their longevity, how advances and availability of specific kinds of preventative care have influenced the change — even whittling down which geographic regions where they have a higher quality of health and life.

The most compelling conclusion is that spaying and neutering pets plays a huge role in extending their healthy years.

Spaying and neutering have benefits besides helping to address the overpopulation problem.

For both unneutered male dogs and cats, they are more likely to be hit by a car or bitten by another animal. Intact dogs also have a higher rate testicular cancer. Females that are spayed benefit from the reduced risk of life-threatening diseases like mammary cancer (especially cats) and pyrometra.

Vaccinations, parasite control and dental care are three main areas of preventative care that have made an impact. The latter has had more emphasis in recent years, and isn’t important only to promote a healthy mouth — bacteria from inflamed gums and the pockets that that result can enter the bloodstream and affect major organs, like the liver, kidneys, heart, and lungs.

The report notes that factors like dogs living indoors and in a geographic region where disease rates (like Lyme disease and heart worm) may be lower risk, seem to contribute to longer lives. States in the south have high rates of heart worm because of heat and mosquitoes. In the northeast, Lyme disease is more prevalent because of disease-carrying ticks.

Here are other highlights from the 2013 State of Health Pet report:

Where They Live
While the medical diagnoses were remarkably uniform across the United States, a few geographic anomalies jumped out:
• Southern states such as Alabama, South Carolina and Arkansas recorded the highest prevalence of fleas on dogs.
• Fleas on cats were most common in Oregon, South Carolina and Florida.
• Dogs in Arkansas, Oklahoma and New Hampshire were most likely to have ticks.
• Cats in Eastern states such as Massachusetts, New Hampshire and Virginia were more prone to ticks.
• Heartworms were most common in dogs living in the Southeast.
• Dogs and cats in Alabama and Mississippi had the most trouble with tapeworms. 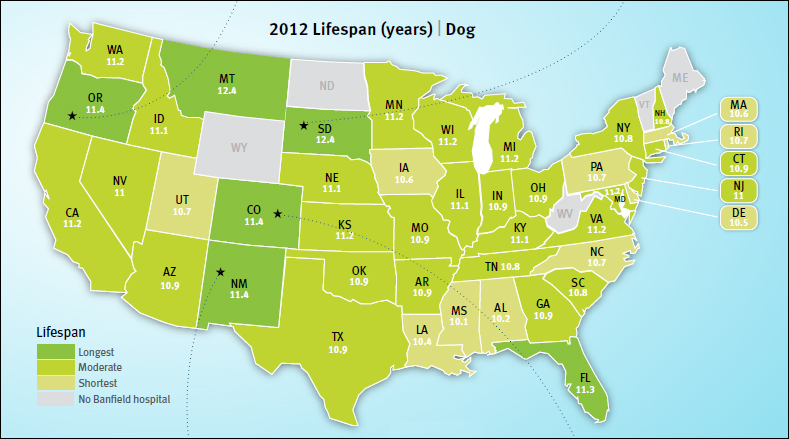 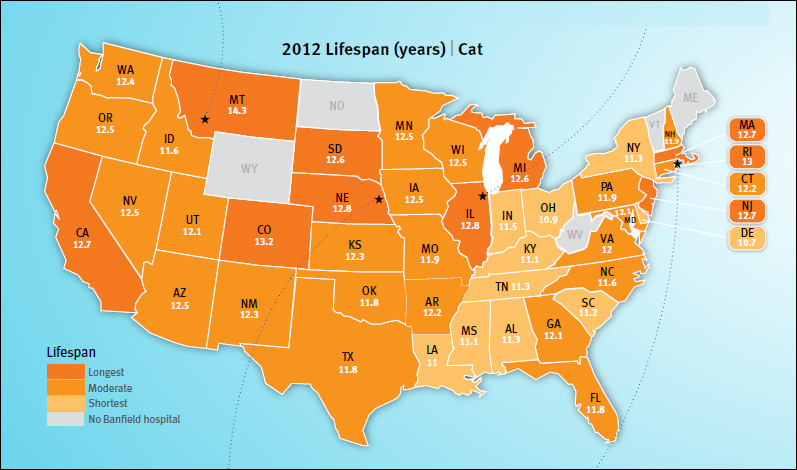 Do you know your dog breeds? Afghan Hound

Signs and diagnosis of bladder stones in dogs

Do you know your dog breeds? Alaskan Malamute